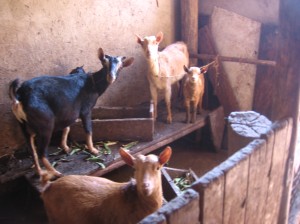 Worry gripped me. I lay awake some semi-sleepless nights thinking about the long route I will follow in the coming weeks on my dodgy, heavily used bicycle and began to feel nervous. People were depending on me now! What if I failed? If my idea to ride around Africa’s largest lake had continued – as it started – as a foolish lark performed solely for my pleasure, then there would be no problem. I’m used to hurling myself into unknown situations. But now people are watching me. They will want results.

So I’m becoming a bit more serious about my preparations. My route plan budgets twenty-four traveling days and several rest days for friend-making, and delay days for unavoidable, unknowable problems that will arise. My notebook has ruled pages devoted to the basics of Swahili (where is the toilet? I want beer!) and a small paper bag with a green cross printed on its face contains fresh stores of ciprofloxacin and multivitamins. My outdated map has been edited, old city names scribbled out and replaced with current designations from Google maps.

Each day I am given different encouragements and different warnings for my plan every time it is presented to sponsors or whomever. Some ask me a reasonable question – Have I ever ridden a long distance like that? My bogus answer is full of place names back in the US, and vague enough to settle the matter. Most just say I’m crazy, which is fair enough.

“That’s not enough time!” someone said, I can’t remember who. This is the criticism that has me worried the most, because no matter how many times I’ve run the calculations and estimated the miles-per-day my skinny legs can pump out, the fact is I have no idea what the other side of the lake is like. Now that there is a big reception planned with music and sponsors and the works, it will be important to arrive on time. 37 days? Good god, I should be able to make it. 37 days ought to be time enough to walk the 1100 miles.

The biggest worry I’d had was regarding my bicycle, Victory. She was once a decent mountain-tamer, made in Taiwan and first put into service somewhere in North Carolina, judging by the dealer’s sticker still stubbornly adhering to her frame. But her bearing surfaces have been neglected and are bone dry, and some critical components had been replaced with awful Chinese garbage. Chinese parts: what they lack in functionality, they make up for in bright colors.

I worked on the bike when I could. My bike tool miraculously made it to Africa with me, and was put to work tuning and tightening the gear shifters and brakes. Other necessary tools were borrowed from one of my favorite neighbors who I know only as Jaja (grandpa). He is the grandfather to my good friend who, aside from having all kinds of great tools lying around his comfortable little home, has all kinds of wisdom and stories to share with me whenever I visit.

Slowly, Victory became easier to handle. Yet missing ball bearings in her headset made for an unsettling clunk each time the front wheel was shoved upward by a hard bump, and the old chain links, probably original, sang constantly in high-pitched harmony of their frictional sorrows, resting only when my legs do. A quiet bike is a happy bike, a good friend and bike mechanic advised me some time ago, and it’s true. Eliminate all the squeals, the rattles, the grinding, the clunking, and you have a bicycle which will glide with minimum effort. This was what I wanted, but I lacked the tools and the lubricant.

Fortunately, we made fast friends with Yusuf, the point man of certain cycling group in the area called Kampala Cycling Club. Yusuf is a quiet and confident man whose powerful body was half hidden under a light jacket when I met him on a post-thunderstorm afternoon on the lumpy, squishy roads that run by Kazo market. He and his team had just returned to the city from a long ride to some other region, though his high-tech road bike was impossible to pilot in our soggy locale, so was dismantled and bundled onto the back of a motorcycle. I told him how we wished to involve his club in the project somehow, and expressed my desire to overhaul my bike. We agreed to meet at the clubhouse on the following Monday.

“You will be most welcome”

A nondescript steel door separates the KCC clubhouse from the outside world, and if one were to peer in between the bars, one would see little more indication of the place’s nature than a few bike helmets hung on nails and a pair of defunct bikes swept to one side. I headed straight in and met two young club members sporting spandex riding suits and preparing some lunch and truing wheels, as well as a quintuplet of goats penned near the back, saying bl-bl-blaaaaaa with that weird humanlike voice, amusing me to no end.

“This place is my mother’s. She lets me use it for the clubhouse,” Yusuf said. Beats the hell out of paying rent.

Deeper and around a few corners is an office-like room with tool lockers, and further, a sunlit loft hung with dozens of magnificent racing bicycles, accessed by climbing a tottering bunk bed. Many of the bikes were old school steel racing stallions with low tech shifters and leather toe straps, while others were matching, next-generation aluminum racing spaceships in bright colors: a rare sight ‘round here. All of them were in splendid shape.

“Where do these come from?” I asked, gawking at the machines that looked like they would take you straight across Lake Victoria if you pedaled hard enough.

“Those come from Norway,” Yusuf explained, “They were donated by a partner organization. Others come from Netherlands, Australia…” They even had a room stocked with shiny new Italian mountain bikes. KCC is well connected with bike teams and associations around the world, regularly receiving bike-related donations. Hardcore cycling friends from abroad take orders of quality replacement parts from Yusuf and bring them around when they show up in Africa for mad bike tour holidays. KCC has just what it needs to keep its fleet moving smoothly and keep its members riding.

“Well,” I hesitated, “here’s my bike…” I suddenly felt a bit self-conscious. My bike was a total junker compared to these fine specimens. I might as well have rode in on training wheels.

Yusuf sat with me to trace my route on my old map while one of the young members, Davik, set about scrubbing hardened mud from Victory’s nether regions. Yusuf showed me where he had circled the lake four times before. His previous jaunts around the lake took 17 days on mountain bikes, spending much time in Serengeti National Park, but cutting out some riding miles by skipping over the lake on two ferry trips.

“We have never been along here,” he said, pointing out a long stretch of road between Bukoba and Mwanza in Tanzania. They also missed s short part to the south of Speke Gulf on the southeastern corner of the lake. “We heard there are thieves along there.”

We spent the next two hours teaming up on my bike’s moving parts. I tackled the wheels and hubs, while Yusuf tore into Victory’s bottom bracket, headset, and derailleurs. The young bucks looked on to study the innards, watching our moves with interest.

It felt great to be sitting in a dingy garage greasing up a relic of a mountain bike with all the right tools and a fellow bike nut who could overhaul a bottom bracket and take tea at the same time. We hardly spoke as we dipped our fingers in the poo-brown bearing grease and smeared it onto Victory’s races; her pulse was strengthening.

I commented on Yusuf’s prowess in bike maintenance and related my story of a flat tire that I had had fixed weeks before. Not having my own patches, I took my bike in to one of the dealers in Kampala’s commerce center. They replaced my tube, but failed to remove the large metal staple in my tire before pumping it up and sending me off. The tube didn’t last long. 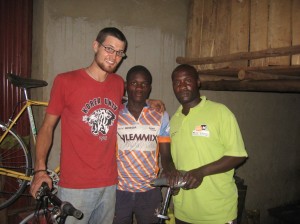 “Those guys don’t know maintenance,” Yusuf said. “They can assemble, but that’s all. They will fix only what you see, but they can’t do this. All the good bike mechanics are in cycling clubs.”

“This is the best club in Uganda!” Yusuf boomed, spreading his arms wide with a wrench in one hand and a rag in the other. The goats bleated in agreement. The be-spandexed boys smiled. Victory whirred smoothly with new life as her parts came back together. I shook my head and grinned, bending down again to continue wrestling with my axles, absolutely in my element. Victory and I will surely make it.