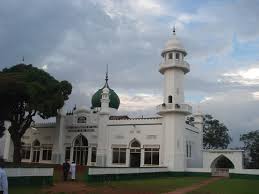 “They get mad at me when I wear this thing,” Yorkman, the bar’s jack-of-all-trades reflected. He had on his long Muslim gown, rich with embroidery, hanging down from his shoulders.

I suppose it’s natural for members of a religious group to feel possessive over their traditional garb. Yorkman is by no means a Muslim, but heck, he looks pretty good in the robe. His go-to special occasion outfit betrays his unaffiliated beliefs, and clashes with his Rasta hat in more ways than one.

It occurred to me that I don’t really know much about Muslims in Uganda. Certainly, a reasonable proportion of the population (around 12%) practices some form of Islam. Perhaps it is less of a craze: you don’t see obnoxious Islamic billboards, or have to avoid offensive roadside preachers reading from the Koran like you do with other religious types. Muslims here seem to be less obtrusive, and more content with their own agenda, than their Evangelist counterparts.

I rode into Masaka, feeling weak. It was the second day of my ride around Lake Victoria, a second day of over 60km without much training. Wanting rest, I called my connection in town, someone I’d never met, but who through some network, was ready to welcome me. It was hard to understand Ali Hasham’s strikingly effeminate voice over the phone, but I managed to  catch his location: “The big mosque.”

I knew where it was without asking. On the higher part of Masaka town’s hillside are two mosques, both quite large, but which differ greatly in appearance. Ali’s mosque, the Aga Kahn mosque, is set a bit higher on the hillside than the Sunni mosque across the street and is shrouded in high walls, fine gates, and spectacular gardens. Ali met me, smiling, as I was shoving my bicycle through the gate and up some stairs.

He’s a man in his seventies, maybe, with a beak of a nose and a receding white hairline which just about reached my shoulders when he was standing. He immediately led me into his home, a beautifully decorated, modern place tucked away in the mosque compound behind more gardens with working water and electricity (notable!). He bade me sit in his living room, suggested I shower, and though Ramadan had begun only the day before, offered to cook lunch for me.

I stayed at Alis into the evening. I met his young adopted children – young Ugandan boys who played endlessly, or else were watching cartoons – and politely questioned my host about him, feeling like I should know something about this kind man who had already been so kind. We chatted about family, his past (he had been ejected from Uganda back when Idi Amin expelled asians, but returned to reclaim his land) and watched the news. He belongs to an Islamic sect called the Ismaelites, or Ismali. Years ago, he had done the tough work in bringing his mosque to Masaka on behalf of Aga Kahn, the spiritual leader of the Ismalis.

He had no interest in enlightening me to his faith, however. When asked about Ismalism, he told me with an air of finality that he wasn’t authorized to explain anything in great detail. Instead, he pulled some literature from a bookshelf in the sitting room: glossy material on Ismali work and the Aga Kahn Development Network. The AKDN is an immense world wide force of development, building remarkably state of the art hospitals, schools in many countries (even Islamic architecture schools at Harvard and MIT). The mags were full of shots from helicopters of immense new hospital complexes, and photos of Aga Kahn himself, smiling, waving, shaking hands. I didn’t push for the details. Perhaps the Ismalis recognize the futility in theological debate, and choose to rigorously keep to themselves. It all seemed very nice, anyway.

Parallels could be seen between Ali’s heavenly compound and the facilities
pictured in the mags. His compound has arguably the finest garden in Masaka, and the buildings, including the airy mosque, all had fresh coats of paint. I remember thinking that this mosque was probably the only building in Uganda that wasn’t allowed to rot and erode into defunctitude. And the congregation? Ali and the youngsters were the only ones around who practiced Ismalism, though there were sometimes special gatherings or conferences.

How it all works, I’ll never know. I sure am glad to have met Ali, though. Such kindness was something I was unprepared for.

I live in Bunga, some seven kilometers or so out of Kampala proper. Thus it becomes a bit of an ordeal to commute. My bike with flat tire, and taxis with jams, I often just take the hour-and-a-half walk into town.

One of the places along the way, once a distinct town but now just a ‘burb, is called Kibuli (pronounced Chibuli). Visible from Kampala proper, and also from much of the southeastern corner of greater Kampala, is the Kibuli mosque, perched on a hill, joined by cell phone towers. Each time I passed by on my long walk, I quested to visit that mosque, but never quite figured out how to get up there.

Then I asked somebody. Turns out it’s pretty straightforward: there’s a road and everything. Beyond Islamic hospitals, schools and other civil entities lies the Mosque. Quite large, and with a big, healthy tree masking it’s facade. It was hot, but the breeze at the parking lot was nice. I switched to general-holy-site mode: took off my hat, held my hands behind my back, strolled slowly and solemnly with an air of respectful inquisitiveness, hoping nobody would give me any grief about wearing shorts or for some other rule I was surely breaking.

I stopped at the front walkway, reading the declaration above the door – Allah is the One and Only God. Mohammed is his Prophet – written in clunking green block letters for the English speakers, but also in beautiful, swooping Arabic. I had never really been in a functioning mosque before, so I hesitated, tried to dig in my knowledge base for hints on Muslim etiquette, found none, and resumed standing around like a dolt. Then a nice man in an intricately embroidered cap came to my rescue. He and his friend were laying mats out on the lawn to receive worshipers, being that it was Friday. Barely audible, he asked “would you like to enter?”

Yes please. He led me to the entrance, and I made a point of removing my shoes before he turned to ask me (See! I’m not a total heretic!). I glanced around at the vast, bleak interior with a few robed men kneeling and laying about, but in an instant the man came back to me. “To the minaret?”

Oh yes. I’d never been in a minaret! He unlocked the door at the near corner, opened it, and gestured me in with an open hand before turning and walking back outside to flatten more mats. I was shocked! I had a wide open, unescorted invitation into the highest, holiest point on the hill! such a thing would be impossible in a European cathedral or some other tall, pointy holy place. Bare feet prints in white paint led me up the concrete stairs past one balcony level and straight to the top. I took in the opportunity with relish.

The view of the city and of my corner towards Bunga was illustrative. I could trace all my routes, name roads, pick out offices I’d visited. The breeze was scores better than it had been in the parking lot. I soaked it in for many long minutes before deciding to leave before the loudspeaker above my head came to life for the call to prayer.

I came down into the main chamber and failed to close the minaret door without the whole thing vibrating deeply along the concrete floor. Fortunately no worshipers seemed to notice. Outside I was greeted again by my pseudo-guide who I thanked and who said, very quietly, “a donation for the mosque?”

I can’t say I didn’t see it coming. I gladly slid what I hadn’t used for taxi fare into a donation box he fetched from the office. Any holy site so trusting and kind as to let me stagger freely into their pointy structures is surely one I would be glad to donate to.

What little experience I’ve had with Muslims here in Uganda has been quite enjoyable. I find their kindness to be paramount, and their humble demeanor to be most refreshing. Though I’m not about to begin wearing their clothes. I’m surely not worthy.