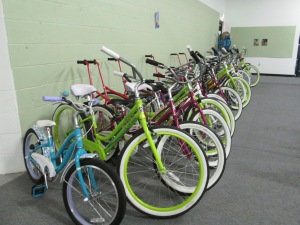 “So when are you gonna be on Ninja Warrior?”

“What?” I was caught off guard by a mother of some bike campers in between sessions. We were outside of Pittsburgh, in Monroeville, PA, at a quaint sports center, and both of us were killing time until the next wave of kids arrived.

“You know, that TV show with the acrobatic people going through all those obstacles. You look like you should be on that show.” She was kind, and would later be thrilled that her son and daughter were both riding two-wheel bikes.

“Well, uh… thanks! Maybe I ought to apply!” I’d always imagined being so nimble.

The camp in Monroeville went smoothly, with a good success rate and lots of fun participants and volunteers. Our camp director was thrilled to have my partner and I conduct the thing with easy going attitudes. We were happy to make them happy, and it paid off, for over the course of the week, we were provided with some great recommendations for food and beer.

My favorite was Church Brew Works, a grand brewery occupying the structure of what was once a big ole cathedral. Inside, shining copper vessels reigned over the beer-guzzling congregation from up on the altar. Though there were well over a hundred occupants, the sheer volume of the grand structure hushed the din without need of background music, preserving the feeling of sanctity that the building was made for in the first place. A waitress explained to me that back in the early ’90s, the building was defunct and scheduled for demolition, to be replaced with a parking garage, then the head brewer stopped by and made an offer in cash. He got the whole property — the cathedral, and several other large buildings once associated with religion — and re-purposed them all for the production and sale of tasty beer. Pews became booths. The place won “Best Brewpub” at Great American Brew Fest last year, according to the banner strung up beneath the pipe organ and between original stained-glass windows.

My partner Kevin bought a growler of beer, his third in two weeks. He collects them. I dig the idea of collecting brewery memorabilia, but for a guy who is in a new state every week, you’d thing he’d choose something less voluminous and delicate. Talk about  nimble. He’d need about all the ninja skills he could muster to get three glass jugs through the airport system unharmed.

Then we had humongous margaritas and he took an Amtrak home.